“You were almost spot on – he won with 61.8% of the vote.” were my first words to my husband this morning – he’d predicted 60%. (Note: it’s always a good idea to marry somebody who doesn’t mind you talking about your interests at 6:30am.) By 7:30am we were both at our laptops, coffees in hand, trying put something coherent down on paper.

There was never any doubt that Jeremy Corbyn would win this election; if anything he has more support than ever within the party. For some today was the day the left “got their party back” after it was “hijacked” by the centre in the early 90s. For others, this is the day the party dies. I consider myself cynically centrist: my views are roughly in line with Corbyn’s but I understand that most of the electorate don’t share them. More than anything I want a Labour government. And no, I’m not willing to wait 20 years for it because lives depend on it.

The problem I have is that all the evidence suggests there is very little in the way of public support for a Corbyn-led Labour Party. Only yesterday there was a poll of Labour voters who won’t vote Labour next time – 71% of them give Corbyn as the reason. 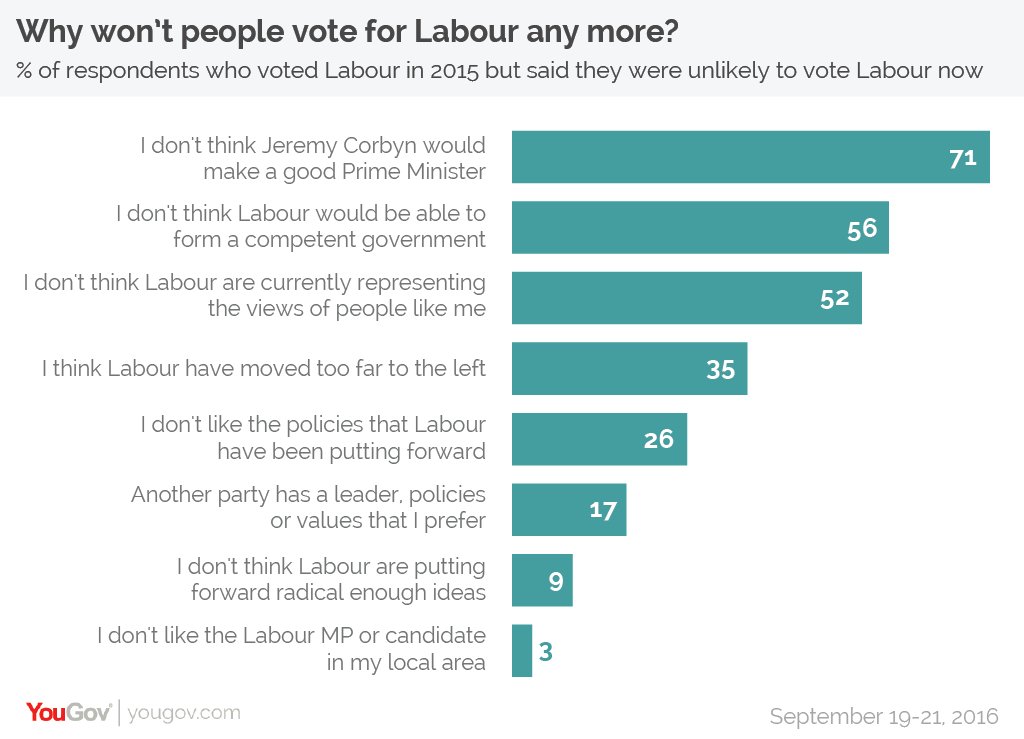 Corbyn supporters have put forward a number of reasons for the disastrous polls: the sample was too small to be significant, the poll was of Sun readers who are right wing or that the poll is just made up. If we are going to get anywhere, is accept the idea that these polls actually represent people’s views. Not 100% accurately because we have to allow for some margin of error  – but we cannot just ignore them. What I want is a membership that, instead of dismissing the information entirely, responds with: “Why don’t we have the support of these people and what can we do to gain it?” We need to be fascinated by the people who disagree with us. We need to find out why they disagree, what their fears are and what they want from their government – we cannot just call them names. We cannot dismiss “The Sun” readers because no election has ever been won without their votes. I wrote this as a comment on social media yesterday and immediately someone replied with, “Why do we need their votes when we can appeal to all the millions of non-voters?” Here’s the thing about non-voters: they tend not to vote.

In the last election 15.7 million registered voters didn’t cast their ballot. I suppose it is possible that they were all refusing to vote until there was a more left-wing candidate on offer but I imagine that they have a broader range of views than that. If the electorate had been desperate for a left-wing alternative then the Green Party would have a strong majority. Yes, there are some people who have been inspired to vote again by Corbyn and that’s great, but to win an election under first-past-the-post we will have to take seats off the Conservatives – that is just a fact. Yes, the system is hugely flawed and we should be campaigning for electoral reform but for now we have to work with the system we’ve got.

The first thing Corbyn needs to do is hire a smart and savvy media team. If elections were won on Twitter, according to my timeline, Ed Miliband should be in Downing Street and the Ed Stone would have pride of place in his  garden. #WeAreHisMedia only reaches those who a) already follow you on social media or b) are interested enough to click on the #WeAreHisMedia hashtag. Most people aren’t interested enough in politics to seek it out. So however much he resents it, Corbyn is going to have to up his game. No more grumpy, snarling comments, no more refusing to participate because of media bias. Yes, the media are biased against him and they will continue to be for as long as he is leader of the opposition. I have no doubt that they are just getting warmed up and as we approach the next General Election they will unleash hell. Everyone Corbyn has ever shared a platform with will be dredged up, the “my friends,  Hamas” quote will printed over and over again until it’s burnt into the electorate’s retinas. Rupert Murdoch managed to decimate Ed Miliband with a picture of him clumsily eating a sandwich – we cannot underestimate the power of the media. Research suggests that the general public believe the media is biased against Corbyn but they still don’t want to vote for him. Just calling the media biased or shouting down every criticism as an MSM smear will not convince the public we should be running the country. Finally, Corbyn mustn’t restrict the outlets he works with because, in doing so, he narrows down his audience. Tim is sat next to me writing about media bias so if you want more on this you can find it here.

Whilst he’s hiring, Corbyn might want to get himself a data bod. You know, someone with a brain for stats and figures. He cannot go on national television and not know the number of seats we need to win an election. He needs to know the stats, the names of the key seats, the number of votes we need to win the swing seats etc… If he really isn’t interested in that information, and surely as leader of the opposition he is, then he needs to hire somebody who will be interested for him. Somebody who will make sure he goes into interviews with all the information he needs.

He will need to compromise and learn to pick his battles. Sadly, now is not the time to be fighting to scrap Trident. Whilst I believe it should be scrapped, and the money spent elsewhere, I know that my views are at odds with the majority of the British public (51% support keeping Trident.) We will not win an election by telling the public what they SHOULD want. We also won’t win by assuming the public will realise how awful the Conservatives are. Regardless of the damage they have done to the country and the lives they have ruined, at the moment they are seen as a safe pair of hands and Labour are seen as unstable and reckless.

On the 23rd of June the country revealed itself to be almost entirely divided in two. Corbyn needs to lay out Labour’s vision for our role in Europe, he needs to address the issue of immigration – and by address I don’t mean dismiss and, more than anything, he needs to convince the public his party can be trusted with the economy. It is a mammoth task and at the moment I have seen no evidence that we’ll succeed but I will keep up the fight.

“The Girl On The Piccadilly Line” started after the last election. Originally my plan was to document the challenges of leading a community school under a Conservative government. When the challenges proved too much and I resigned from the profession I was worried I’d have less to write about. As it happens 2015-2016 has been the most turbulent political period in my lifetime. We’ve had a referendum, resignations from the leaders of all 5 main political parties, a mayoral election, David Cameron fucking a pig, Nigel Farage resigning then un-resigning – then resigning again, Gove and Boris cosying up for to lead the Leave campaign then stabbing one another in the back the second it was finished and two Labour leadership elections in 12 months – there’s been no shortage of matierial.

I hope, more than anything, that over the next few years I will be able to document Labour’s rise to power. I will fight and campaign with Corbyn because I am proud to be a member of the Labour Party. We’re the party of the NHS, the Civil Partnership Act, the Human Rights Act and the Equality Act. We have a history of fighting for a more equal society. Quality of life under the Tories is declining at an exponential rate and we desperately need a Labour government. Can we win? I don’t know – but I’m not going to stop trying.

Where Are Your Other Posts?